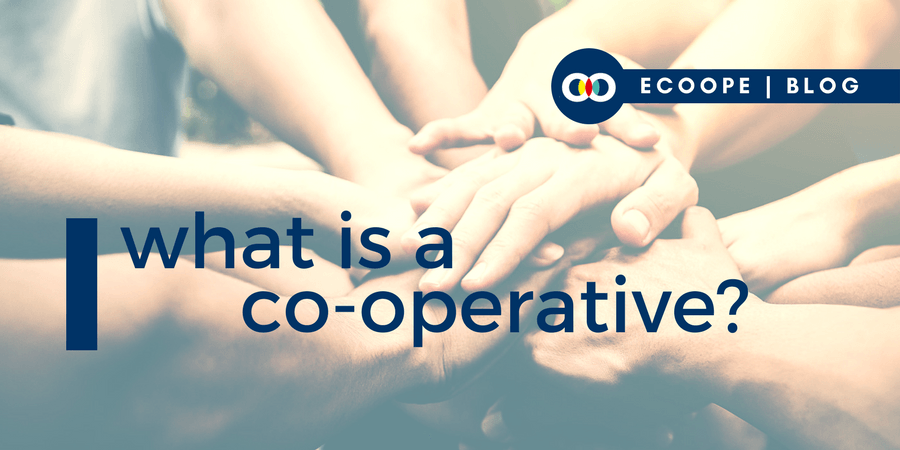 09 Ago What is a co-operative?

There are two reasons why you are here: a) you want to know what a co-operative is or b) you already know, but want to check if we do ?. First things first, let us put our academic-looking glasses on and check several dictionaries to see how do they define “co-operative”. Merriam Webster’s Learners Dictionary says a #coop is “a business or organization that is owned and operated by the people who work there or the people who use its services” and Cambridge Dictionary also coins “co-op” as a short form of “co-operative: a company that is owned and managed by the people who work in it”.

Ilana Gotz, researcher of our partner Euricse, give us another definition of co-operative. She highlights that is “a people centered business model” and “whereas in other businesses a lot of focus is on distributing the profit, in co-operatives the focus is mutual aid and keeping jobs”.

But #coops are more than that: they are a profitable business model where economical and corporate goals meet social objectives, and have shown their value during difficult times, as Ilana said. We will talk about that later because, as you may know, #ECOOPE is a project that revolves around the co-operative movement to help European youth find other career and business opportunities. Back to #coops, their most defining feature would be that are businesses that place values and profit on equal footing, and as the International Cooperative Alliance specifies #coops stand by “internationally agreed principles and act together to build a better world through co-operation”

How do co-operatives work?

Though co-operatives look alike any other business around, if you look closer you’ll see what makes them so special: their members. That is because they are the centre of #coops, whether they are employees, producers or clients. But, in spite #coops are people-centered businesses, THEY AREN’T NGOs: they do business and share/ invest equally their profits. Co-operatives are a flexible and autonomous business model where people get together to meet their economic, social and cultural goals. Also, the members have an equal say in what the business does.

Due to all this, co-operatives play a quite important role in the European Union’s social economy ecosystem dynamics: nowadays, there are 180.000 cooperatives througout Europe. Besides, they employ 4,5 million people and their turnover is like the sum of the GDPs (gross domestic products) from Finland, Denmark, Norway and Sweden.

co-operative, coops, coops101, ecoope, what is a cooperative